Vinicius Junior has been one of the best players of Real Madrid’s 2021/22 campaign, in which they ended up winning their domestic league: LaLiga, along with the prestigious UEFA Champions League.

Vinicius, who initially struggled to adapt to European football after an early move to Real Madrid at a ripe age of 18, broke through his shell this season and turned out to be one of the best wingers in the top-flight of European football and arguably the most improved player in Europe this season.

Vinicius began his official football career at Flamengo in 2017 at the age of 16. After having a promising start at Flamengo, Real Madrid took interest in him and decided to buy him at a whopping €45 million, which was at the time, the second most expensive sale of a player in the history of Brazilian football (behind only Neymar), the largest amount received by a Brazilian club for a transfer, and the highest amount ever paid by a club for a footballer under the age of 19.

Vinicius made his official debut for Real Madrid in 2018. He is usually deployed as the left-winger, but he’s versatile enough to play in any position in a front 3.

In the early stages of his career at Madrid, he showed his potential with his acceleration, pace, dribbling, and flair but struggled to adapt to European football in terms of his decision-making skills and output.

In his breakthrough 2021/22 season, he worked on his weaknesses and formed a lethal partnership with Karim Benzema in the attack. His end-product significantly improved in terms of goals, assists, and other traditional and advanced metrics.

In this blog, we draw a comparison of Vinicius’ stats for 2020/21 versus 2021/22 season. We see which factors he has improved in and how much of a stark difference there is between the two seasons.

So let’s start with the comparison! 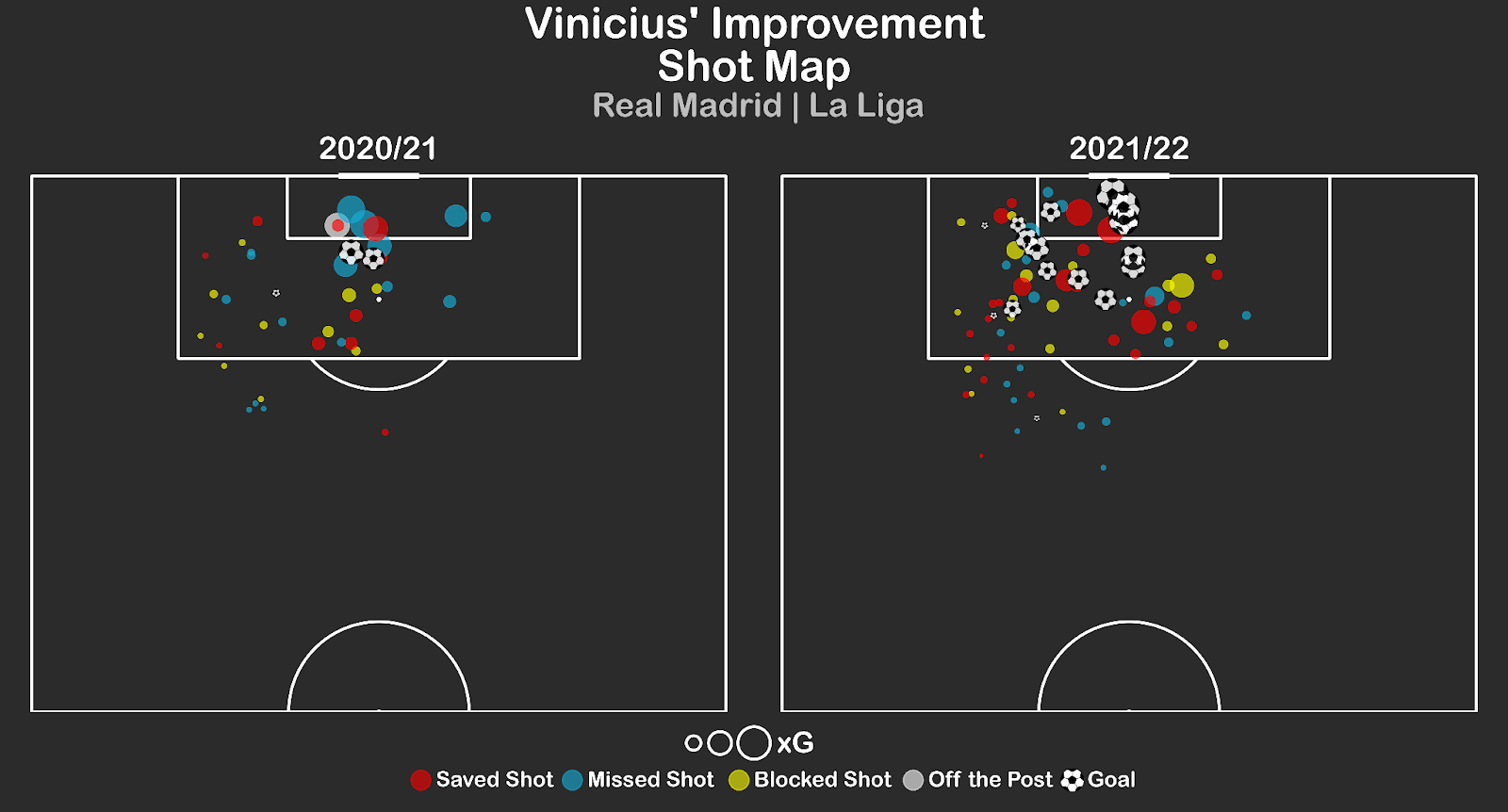 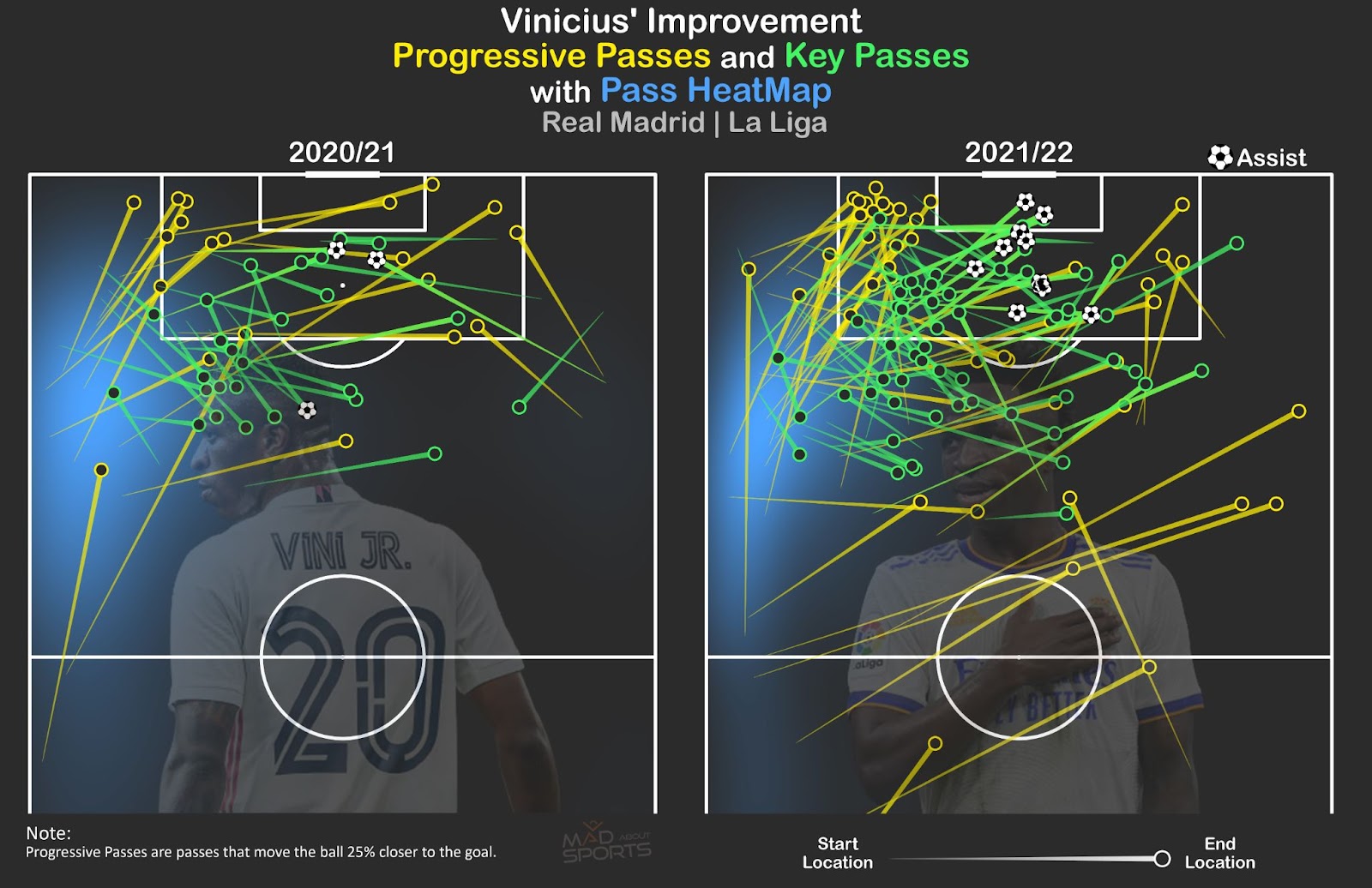 Vinicius’ improvement in his decision-making skills can be clearly seen in his passing and chance-creation. Even though Vinicius had the ability to get into threatening locations with his dribbling and carrying, he struggled to make the right pass at the right time. However, under Carlos Ancelotti, he started to be more involved in the game and improved his link-up with his teammates.

In the 2020/21 season of LaLiga, Vinicius attempted 36.1 passes per 90 and had a pass success rate of 82.8% whereas, in the 2021/22 season, Vinicius attempted 42.9 passes per 90 with an 83.4% success rate. He was able to increase his passing volume without affecting his percentage of successful passes. Also, his progressive passing improved from 24 Progressive Passes to 60 Progressive Passes in the two seasons. 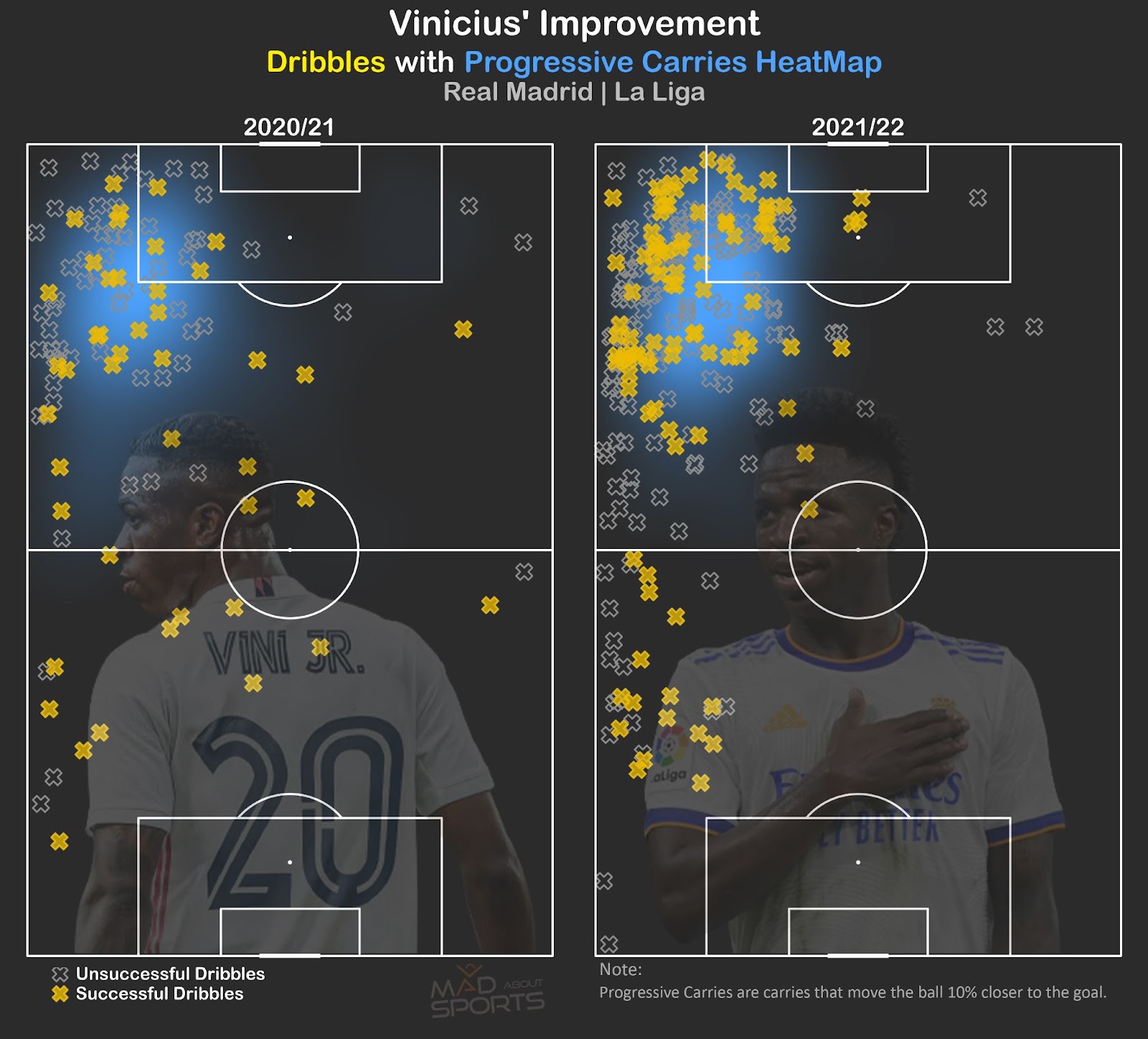 Vinicius’ greatest strength has always been his ability to dribble and beat the defenders in 1v1s and carry the ball high up the pitch into dangerous locations. 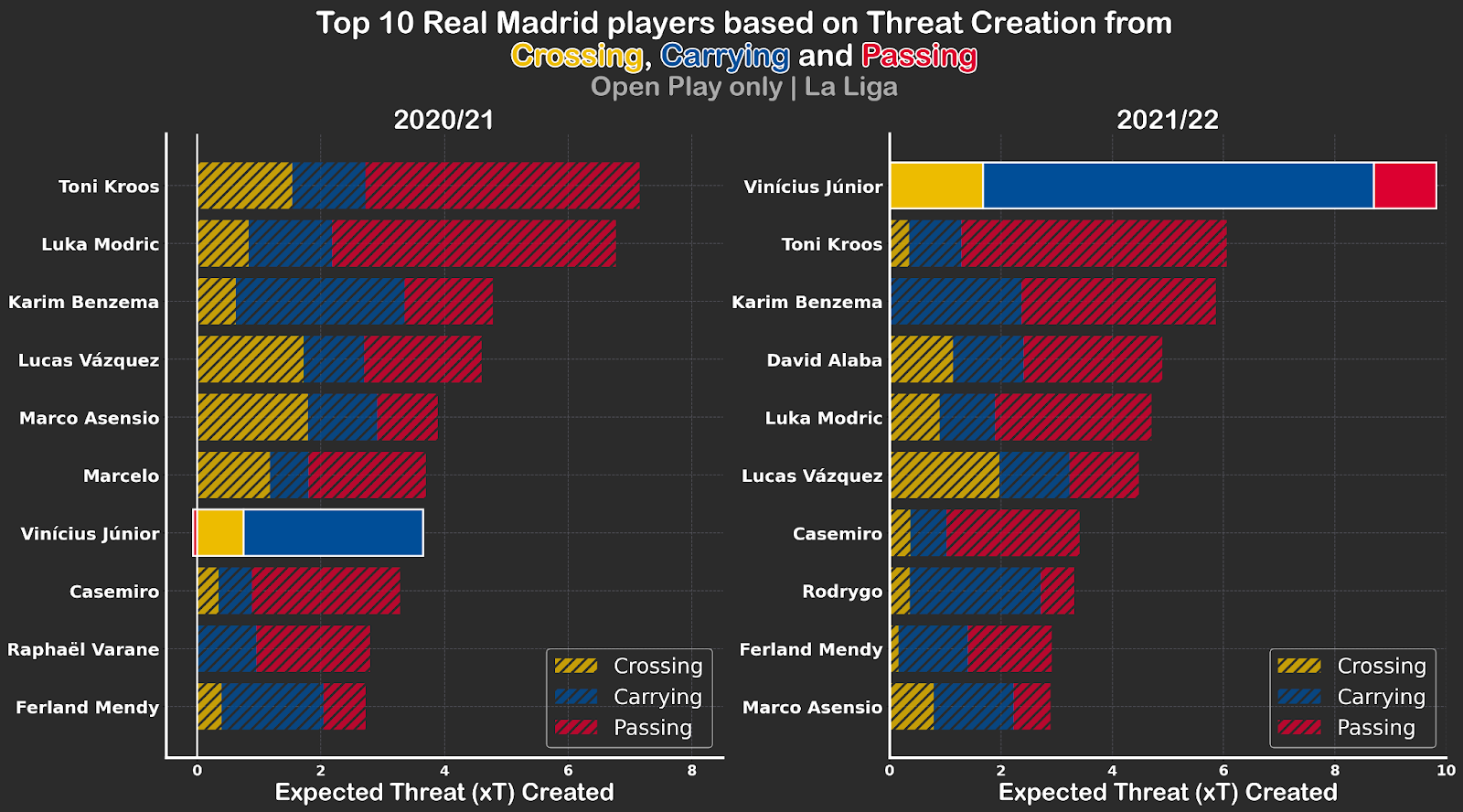 xT (Expected Threat) created shows Vinicius’ improvement on the ball better than any other metric.

From the above visualization, we can observe that Vinicius wasn’t in the top 5 players of his own team and his xT contribution through passing was negative in his previous season. This makes sense considering his inability to provide the final ball in the 2020/21 season.

In the latest season, however, Vinicius made a significant jump. He created most xT in his team. His xT created from his carrying alone was more than the total xT created by any of his other teammates. 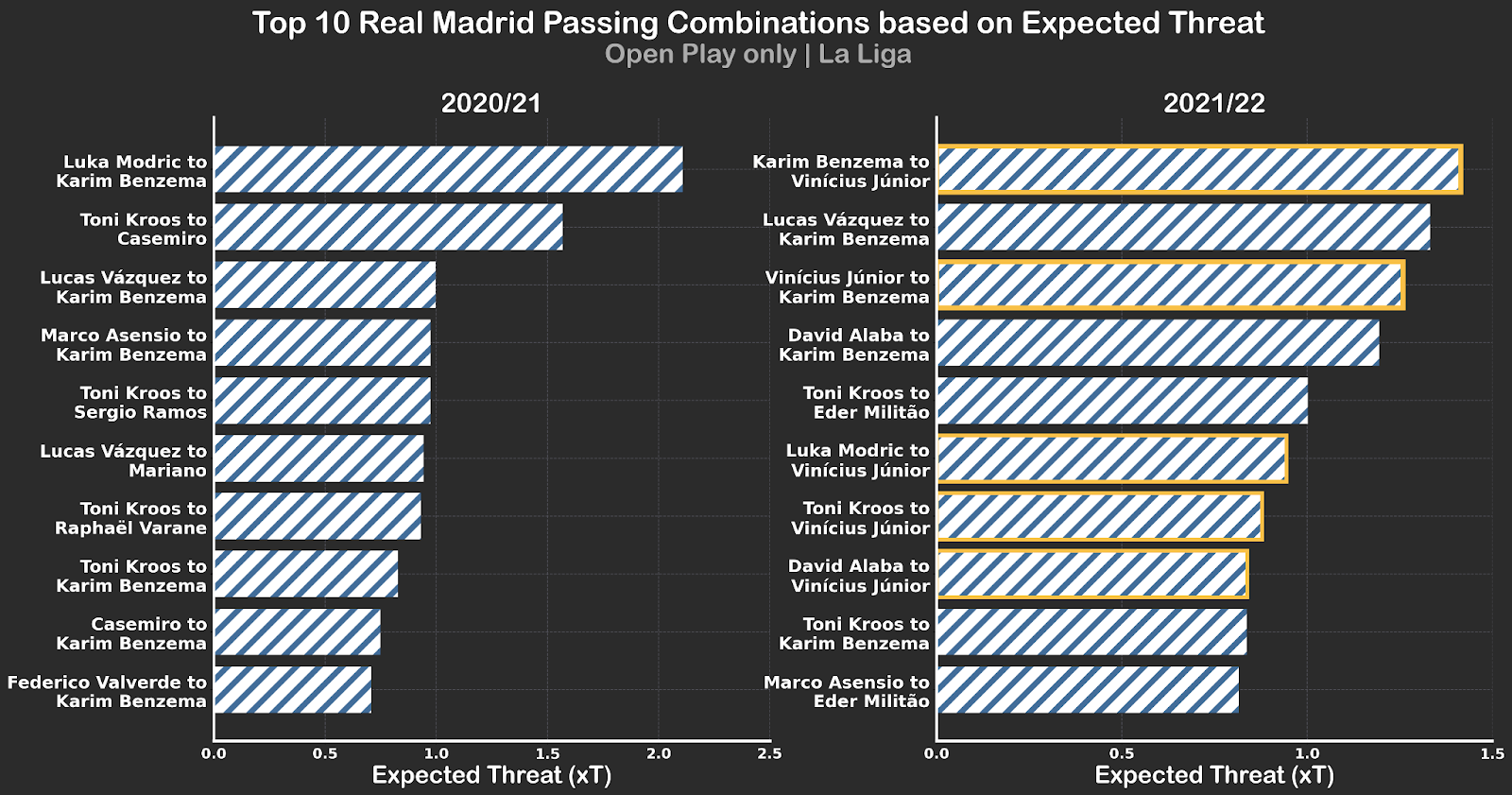 Vinicius didn’t belong in any of the top 10 xT-based passing combinations of his team in his previous season. He struggled to link up with his teammates in the final third.

However, in the 2021/22 season, Vinicius belongs to 5 of the top 10 threatening passing combinations of his team. His linkup with Benzema is not only the best xT-based partnership in his team but also one of the most threatening partnerships in the top 5 leagues of Europe. 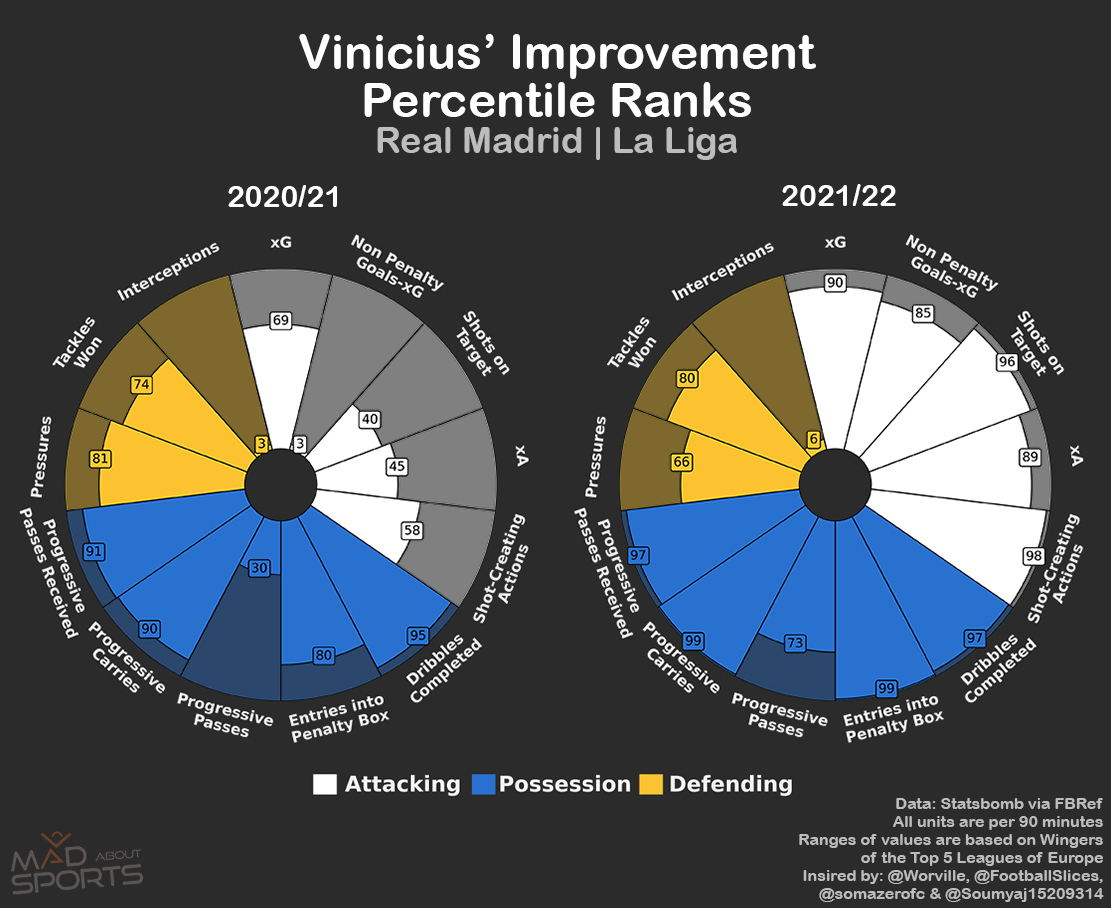 From the above visual we can observe Vinicius’ improvement in almost all facets of his game. But clearly, the most significant improvement comes in his attack, with him turning into a reliable offensive threat for his team.

After analyzing Vincius’ stats on various factors, not only did his end-product substantially improve but also their respective underlying metrics improved, indicating this isn’t any serendipitous season for him.

This can be mostly attributed to Carlo Ancelotti’s special focus on Vinicius along with a change in tactics to get the best out of him. Vinicius’ newfound partnership with Benzema and not to forget, the work Vinicius put into his finishing on the training ground.

Vinicius turned out to be one of the best wingers in the game at an early age of 21, and he has a lot more potential to grow. At a club like Real Madrid, where he is likely to be their cornerstone of success for years to come, sky’s the limit for Vinicius.

LEARN CRICKET ANALYTICS AND WORK WITH YOUR FAVOURITE TEAM!

Hi, I am Chaitanya, an avid sports fan. I love watching and analyzing sports, especially football. I support FC Barcelona. I am currently working as an intern at Mad About Sports.